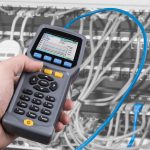 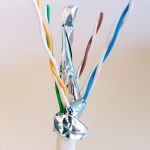 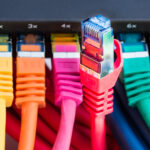 Here we discuss a range of common questions about Cat6a cabling. These are questions that are commonly asked by clients for the installation of various Cat6a cabling projects. For further information, our project team is happy to help or arrange an on-site survey for further assistance.

What is Cat6a cabling?

In a similar manner to Cat5e and Cat6 cable, it is constructed of 8 separate cores split into 4 pairs of colours. Thus, it is classified as a twisted pair data cable. These pairs are twisted together throughout the length of the cable in colour groups. Therefore, we have 4 pairs of different colours . The Cat6a cable pairs the same as the other categories. These colour pairs are a solid and a white/solid combination. The colours are Orange, Green, Blue, and Brown

In comparison to previous categories, it can have a thicker outer jacket, tighter twists, and increased internal airspace. All these elements are created to reduce noise crosstalk during higher transmission speeds. However, these elements result in a larger cable size

What is the Cat6a cabling speed?

The maximum frequency for cat6a cable is 500Mhz. This is an increase from 250MHZ from Cat6 cable and an increase from 100MHZ for Cat5e cable. Cat6a cabling is also ratified for 10 Gigabit transmission over the standard permanent link length of 90. Previously, Cat6 was only capable of 10 Gigabits up to 55 m

The majority of structured cabling is terminated using the RJ45 termination standard. The RJ45 termination standard is found in Cat5e through to Cat6a. In the categories above Cat7, similar elements of the RJ45 connector are still present with the addition of 4 additional connection points. However, all the categories still plug into one another and are therefore backward compatible.

There are 8 core colours within the connector and these are split into 4 pairs. These pairs are twisted together and the tightness of the twists increases by category. The colours pairs are Blue, Green, Orange, and Brown. These are consistent throughout the cable, module, and patch panel. Also, they are consistent through structured cabling categories. Therefore, regardless of the structured cabling category, transmission still occurs

How much is Cat6a Cabling? Cat6a price per point?

A starting point for Cat6a cabling cost per point is £50.00 – £65.00 per point. However, this will depend on several factors. For example, the structure, scheduling, and total number of outlets will all affect the price

Cat6 is the advanced category of the data cable to Cat5e. The main difference between cat5 and cat6 is that Cat6 by comparison has a bandwidth of 250Mhz, so in essence two and a half times the capacity. However, at the standardised 90m permanent link distance they both only transmit 1 Gigabit Ethernet speeds. However, Cat6 is capable of 10 Gigabit Ethernet up to 55m, although this isn’t a standard length for data cabling design considerations

Cat6a was the category of structured cabling ratified after Cat6. It stands for Augmented Cat6 . With some manufacturers you will find a cable branded as Cat6e (Enhanced Cat6) cable. This category is not ratified by regular standards. Thus, Cat6a is the next official category in the structured cabling timeline

The next difference is Cat6a cabling is standardized for 10 Gigabit transmission over 90 meters. Structured cabling design bases its standards around a 90-meter permanent link and an allowance of 10 meters for both patch leads. By comparison, Cat6 cabling was only capable of 10 Gigabit up to 55 meters and was therefore rarely considered for 10 Gigabit network design

Cat6a vs Cat7: What’s the difference between a Cat6a and Cat7 Ethernet cable?

Cat6a and Cat7 cables differ in a few different ways. Cat7 cables have an increased amount of shielding. In each version of Cat7, each pair of transmission cores is shielded and so is the overall cable.

This is only present in Cat6a F/FTP versions. In other versions of cat6a cable, the outer sheath or inner cores are unshielded

Transmission capabilities are the biggest difference between Cat6a and Cat7. Cat6a cable operates at 500Mhz. However, the Cat7 cable has a maximum frequency of 600Mhz. Cat7a standards in some manufacturers reach a frequency of 1000Mhz Both cables are ratified to transmit 10 Gigabits at 90 meters. However, testing in some Cat7 cables reveals the ability for 40 Gigabit up to 50 meters and 100 Gigabits up to 15 meters

What is Shielded Cat6a cabling and What Different Types are there?

With Cat5e and cat6 cables, there are two main types of cable differences. They either come in a shielded or unshielded version. With Cat6a cable there are 3 different variations

Visually the shielded cables look the same in many ways. However, the addition of a foil shielded around the cores, or around the outer sheath, increases the size of the cable. However, this shielding adds protection from EMI and external noise

Can I run HDMI over Cat6a?

When sending HDMI signals over structured cabling, Cat6a is a great choice. Many audio-visual manufacturers have created a specific HDMI transmission twisted pair cable. The performance of these cables is similar or identical to Cat6a. The shielding found in cat6a versions is suitable for audio-visual transmission with better protection from interference on the AV signals

In these transmission links, the source equipment converts the HDMI signal into a suitable transmission for the Cat6a cable. The receiving end reverses this conversion from structured cabling back to HDMI.

What is a Cat6a Jack?

The majority of Cat5e and Cat6 cabling terminations are completed with what is referred to as a module. A termination module is a one-piece unit that contains the RJ termination outlets and a plastic casing that fits directly into a faceplate. At the patch panel end, all 24 terminations are pre-built into the panel

With Cat6a cable terminations, a termination jack is used. This is a square termination block where the cable is connected. This is the same for both the user outlet and patch panel end. These jacks are then "snapped" into suitable shutters that fit a faceplate or floor box. Furthermore, the patch panels have 24 empty slots, of each which these jacks snap into.

Can I join Cat6a cable?

The standard advice with all structured cabling is that the cables should be a direct link with no joins. However, in some cases, there is no choice other than to join the cables. Therefore, it is possible to use an inline IDC connector.

With an inline IDC connector, a junction box is used to permanently punch down two Cat6a cables at opposite ends of the junction box. This box itself then creates the permanent join between the cables. When you use these types of connection boxes, the cable will still pass a Fluke certification test

It is not recommended to extend two Cat6a cables with a patch lead and jacks or couplers. The patch lead creates an additional loss in the link and can cause the overall link to fail when testing

What are my options for Cat6a outdoor cable?

Can you use Cat6a cable for telephone outlets?

The majority of telephone systems are now operated on the VOIP transmission protocol. An explanation of What is VOIP can be found here

Current VOIP systems either run at 100 MB or in some cases over a 1 Gigabit transmission links. Therefore, currently, all structured cabling systems are suitable to run VOIP. However, if the overall design calls for an allowance for 10 Gigabits to computers, servers WiFi etc, the telephone points would use the same structured cabling as the other elements. Therefore, the entire office would be wired with Cat6a cabling to achieve these requirements.

Structured cabling design ensures that all technology can work over any of the cabling outlets. Therefore, the phones would operate over the same links as the computers and vice versa

Do Cat6a cables work with Cat6 and Cat5e?

For example, if a Cat6a cabling link is installed and Cat5e patch leads are used, then the performance is only capable of Cat5e performance. Thus, the overall link loses its ability to transmit 10 Gigabit Ethernet. This is a common problem we see when clients move into a new building and use their old patch leads from their previous building.

How to differentiate Cat5e, Cat6, and Cat6a cabling?

The quickest way to see the difference between the cables is on the outer sheath of the cable. The sheath contains codes and markings to clarify what type of cable it is. In some cases, it may be a part code that is easily searched for clarification. Telling the difference between Cat5e and Cat6 or cat6a is visually straightforward. The Cat6 versions will have a plastic central divider whereas the Cat5e will not. However, the visual look of Cat6 and Cat6a is quite similar. One visual difference if you have both cables is that the Cat6a cable is larger in diameter and size. It will also feel physically stiffer.

If you have a single cable with a central divider and you are unsure of the cable type then the outer cable sheath markings are the best way to tell. We are happy to advise on this and can feedback on the category with a photo of the outer sheath markings

How to test Cat6a cable?

Cat6a can be tested in a variety of ways, but there is only a single option accepted in the industry standards. A basic test is by using a continuity tester. With a continuity test, the cable has a tester placed at both ends and 8 lights confirm if all 8 connectors (4 pairs of cores) have been terminated correctly and in the expected order. The limitation of these testers is that no feedback is calculated about the performance capabilities of the cable and whether it is capable of the correct transmission.

Furthermore, with these testers, it may show all 8 cores correctly terminated. However, it does not feedback interference and how it affects performance from outside interferences. These interferences can be from other cores within the cable or other cables in the same bundle. Even though a cable is terminated in order, if it's not terminated correctly and tested with the correct tester you may not have a suitable link

Therefore, it is extremely important that all data cabling be tested with certification test equipment. A Fluke DSX is such a tester for example

This type of tester creates results and charts that highlight different aspects of the performance of the cable. Furthermore, the effects of poor installation and faulty terminations are highlighted.

Each cable run has an individual summary sheet. A green tick will show all standards have passed and a red cross will show that the cable is not up to transmission standards

Cat6a cabling is similar to Cat5e and Cat6 in that it is capable of 1 Gig Ethernet. This is for a 90 m connection, again the same as Cat5e and Cat6 up to 90 m for a permanent link. All structured cabling for copper links design is based on a permanent link of 90 meters and an allowance for 10 m of patch leads in total. Therefore, for Gigabit Ethernet, Cat6a cable has no advantages over Cat5e and Cat6

Can I use Cat6a for 10 Gigabit Ethernet?

Cat6a is not suitable for 40 Gigabit Ethernet. Even in the situation where it could be possible, too many complications with complex hardware would need to be configured that it would not be the choice for installation.

What is the maximum distance of Cat6a cabling?

Therefore, the maximum distance for Cat6a cable is 90 m if using patch leads. Calculations can be used for longer distances and shorter patch leads, but this is the starting basis for the design