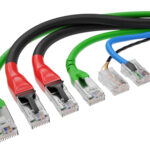 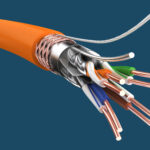 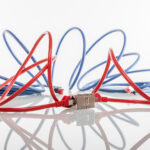 What is Cat7 Ethernet Cable?

The Category 7 cable, which is often also called Cat7 Ethernet cable, is an advanced data cabling solution. Cat7 has the ability of a range of transmission requirements such as Gigabit, 10 Gigabit, 40 GB, and 100 GB Ethernet setups. A Cat 7 cable offers performance up to 600MHz. Cat7a offer performance up to 1000Mhz

However, in many situations, it is still an unknown cable category in telecom networks. Tests have shown that it can transmit 40 Gb at 50 meters and also 100 Gb at 15 meters

What is the Cat7 Cable Specification?

Cat7 Ethernet cable is specified in the ISO / IEC standards as a "Class F " cable. This follows on from the previous Classes such as Cat5e - Class D, Cat6 - Class E, Cat6a - ClassEa. The specifications are to cover generic data cabling situations for a wide range of applications. Therefore, whatever the technology employed, they will all perform the same over a set standard of data cabling class rating

What is the Cat7 Cable Speed?

The Cat 7 was designed to support 10 Gbps Ethernet. However, certain tests have shown it to be much higher. Furthermore, showing capability for 40 Gbps and even 100 Gbps. The 100 GB capability has been tested to 15 meters – however, an exact setup of synchronized hardware will be required. It must be kept in mind however that these are lab tests and not standards set by the cabling standard authorities.

What is the Cat7 Max Length

Cat7 standards are standardised at a permanent link of 90 meters, the same as all previous categories. There is an allowance of 5 m patch leads at each end. A direct link of 100 m is also applicable. The Cat7 max length should be considered and adhered to in all designs. Outside of these distances, the performance of the cable will be unknown.

What is the Cat7 Connector?

A Cat7 connector looks in many ways similar to those of the previous data cabling categories. The RJ45 plug connector is still present. However, there are additional connection points within the termination connector. These new connectors are commonly known as TERA or GG45 connectors. These changes are replicated whether they are within a termination jack/modules, a termination plug, or a Cat7 patch cable. Also, the hardware used for transmitting and receiving must be capable of operating over these additional termination points. Therefore, a Cat7 cabling system is a large undertaking and consideration

Due to the central RJ45 connector, Cat7 cabling will plug into the previous Cat5e, Cat6, and Cat6a systems. The reverse is also true. However, a cabling system is only as fast as its weakest part, Therefore, when combining systems, the overall performance will only be as good as the lowest category of cabling within that link. For example, plugging a Cat7 patch leads into a cat5e system doesn't change the performance from a Cat5e system. By contrasts, plugging a cat5e patch lead into a Cat7 system reduces its cabling standards to a Cat5e cabling link

The below chart will give you a comparison of cabling systems

The construction of the Cat7 cable is also further advanced. It has greater shielding to protect better against EMI and alien crosstalk. Both of which hinder higher speed transmissions. Cat7 has individual shielding for the inner pair twists as well as an overall shielding for the entire cable. This is the core standard in Cat7 cables. However, it is also seen in some options for Cat6a cables, although not as the common standard.

Cat7 vs Cat8 - What is the difference between Cat7 and Cat8

The first main difference between Cat7 vs Cat8 is the bandwidth. Cat7 Ethernet cable is rated at 600Mhz, Cat7 cable at 1000Mhz, and cat8 at 2000Mhz

Cat8 is a standard that differed from previous cabling categories. In previous categories, the standard of 90 meters was used to judge the performance of the cable. Also, what transmission speeds it was capable of over that link length. However, with Cat8 its ability over 90 m isn't of any difference to Cat6a and Cat7 in that it still only achieves 10 Gigabits at that distance.

Cat8 cable has a maximum Permanent Link Length of 24 meters and a max Channel length of 30 m when supporting 25Gbps and 40Gbps speeds. It is the first cable to be ratified at these distances. Therefore, the main difference in Cat7 vs Cat8 is the ability of Cat8 to be ratified for 25 Gigabit and 40 Gigabit

We have also written several other articles concerning Cat7 cabling and other categories. Please click below to read these articles

Cat6 vs Cat7. Whats the difference?

What is Cat7 Ethernet?