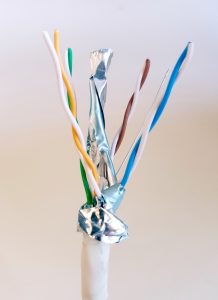 Cat6 cable was first launched in 2002, superseding Cat5, and soon became the industry standard thanks to enhanced performance. Cat6a cable became available in 2009 and delivered frequency capabilities of up to 500 MHz. These frequencies are twice that of Cat6 cable. Cat7, launched in 2002, cable can go a little further with frequencies of 600 MHz, but has failed to make significant footholds in the market. And, as a result, Cat6 and Cat6a remain the industry standard. When it comes to installing and terminating Cat6 or any other data cables there are certain standards to be followed

But which cable should you go for? Cat6 or Cat6a? Cat6 cable is certainly cheaper than Cat6a, but this is where the benefits stop. Cat6a is capable of operating at higher frequencies and it is also capable of maintaining network speeds of 10 Gbps over 100m. Cat6 can only manage 10 Gbps over a maximum of 55m, so is not recommended for large scale networks where speed is essential. As ever, each specific project will have different needs, so it’s important that you weigh up the pros and cons of each cable against your budget.

Cat6 and Cat6a cables may be different, but you can still use them together. Cat6a cable was designed with backwards compatibility in mind. The connectors for Cat6 and Cat6a are identical, so this guarantees simplicity when upgrading or connecting cables.

Terminating Ethernet cables is necessary if you want to cut cable to a specific length during installation of your network, or if you have a broken cable that needs repairing.

Cutting cables to the appropriate length is important as failure to do so can lead to tangled wires and potential trip hazards. Thankfully, terminating your Ethernet cables such as Cat6 and Cat6a is a fairly simple process and doesn’t require an electrician.

All it takes is a few simple tools and a roll of cable. Unravelling the wire to your desired length is the first step. And once you’ve measured this out you can strip the ends of the cable to reveal the bundle of wires within. These wires then need separating into pairs (make sure they are the same pairs at each end) and inserting into a boot connector with a ground strip. For IT installation professionals this is a straightforward process. Take a look at our DATA Cabling FAQs for more information on the various CAT systems and DATA cabling terminology

These cables are compatible with each other, so it’s possible to terminate both types on the same network. Larger networks are likely to be working with Cat6a due to their enhanced ability to maintain speed over long distances. Either way, both cables offer a simple networking solution.