Passive Optical Network is suited to both residential and commercial environments. It is the umbrella term for networking infrastructure that is based over fibre optic technology cabling

It is considered the lowest cost, longest life and highest speed solution in the industry with high flexibility and upgradability options. The fibre infrastructure consist of numerous Optical Network Terminals (ONT) connected from an Optical Line Terminal (OLT) usually at the main communications room and where the incoming IP provider comes in. The terminals are connected via single mode fibre optic cabling also known as a passive Optical Distribution Network (ODN) 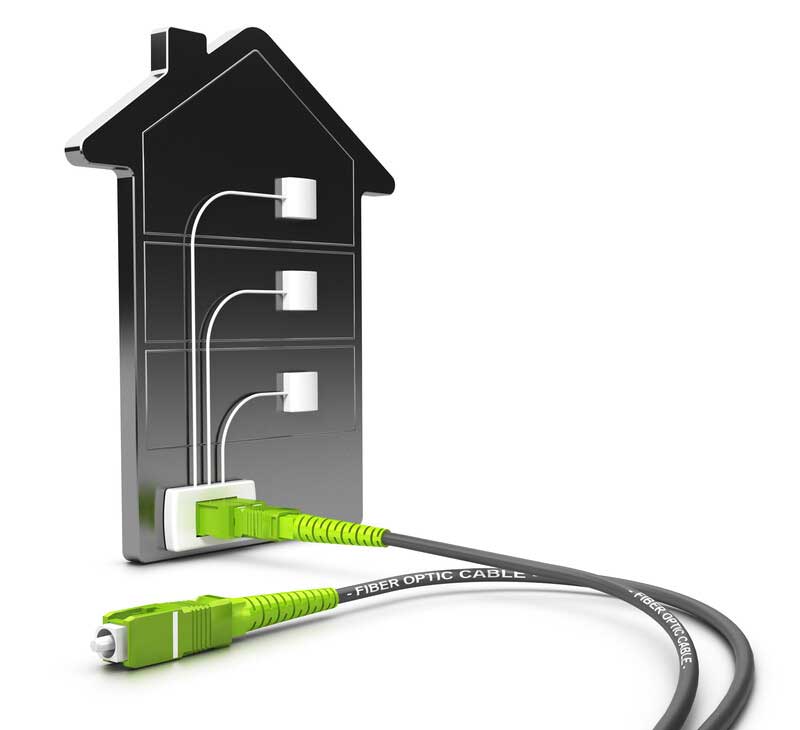 What is an Optical Distribution Network (ODN)?

The fibre infrastructure consist of numerous Optical Network Terminals (ONT). These are connected from an Optical Line Terminal (OLT) usually at the main communications room and where the incoming IP provider comes in. Then the terminals are connected via single mode fibre optic cabling also known as a passive Optical Distribution Network (ODN)

The ONT is where the fibre cabling element of the system is terminated as a demarcation point. This defines the distributed system and to the local structured cabling. This could be a separate floor, office or apartment served by the PON system. Then the ONT converts the fibre cable to electrical signals then sent over copper cabling and the reverse when accessing the outside service providers

What is an Optical Splitter?

Optical splitters are the central pathway creators within the PON system. As the system requires no powered elements outside of the original transmission and receiving ends the splitters are used to deviate and route the fibre signals through the distribution network 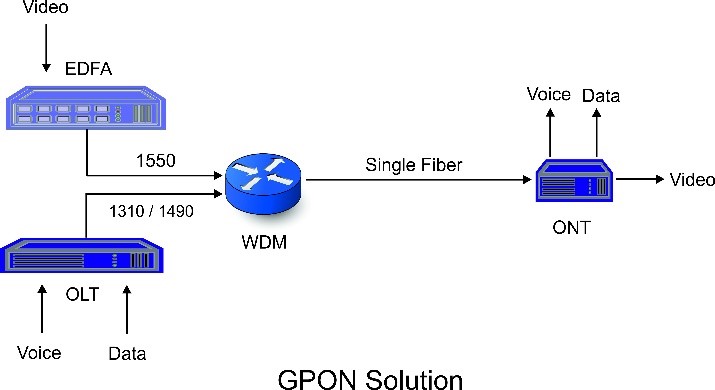 What is the difference between Passive and Active Optical Networks?

As stated above the PON system only requires powered elements at the source and end points of the systems. Then the routing and splitting of the networking is then done via fibre optic splitters in a “Passive” manner.

In an “Active” system individual powered switches or routers are placed at interval points which take the signal and distribute further along the network. Additionally there are several additional stages of powered equipment in the active system than are in the passive system

GOPON is a PON system that is able to carry Gigabit bandwidth throughout the system. This allows high bandwidth and the reduction of bottlenecks commonly seen in copper cable backbone systems

The distribution reach of GPON and PON is also much longer depending on manufacturer but in the region of 12.5 miles

GPON is also able to support multiple carrier services such as video, voice and data enabling it to be an all services solution in a single design

The network topology is structured around a single mode fibre optic cabling installation. The design will then be built around the requirements of that building and its future use and scalability

PON Installation in the Home

An incoming internet provider will install a fibre optic incoming cable which will then terminate into a demarcation box. This is within the home and then into a Fibre to the Home management box. This then terminates into an Optical Network Terminal (ONT) from which copper structured cabling distributes throughout the home

PON Installation in the Office

An incoming internet provider will install a fibre optic incoming cable which will then terminate into a Main Optical splitter for the building. A fibre optical cable will then feed from this splitter to each office dwelling and into a fibre termination box. This will then terminate into an Optical Network Terminal (ONT) from which copper structured cabling distributes throughout the home

Standards homes typically have a maximum of around 100mbs capability of their incoming broadband. PON is split into 2 signals and delivers 2.5gbs downstream and 1.25gbs upstream which is 10-12 times the limitation above. Unused bandwidth in the system can also be allocated elsewhere to allow increased speed within the system

Due to the reduction in active equipment, the size of the equipment and the requirements for cabinets, power and cooling of that equipment, large amounts of equipment can be saved and in turn save the floor space required to house that equipment

The cost savings range from the reduced active equipment that is removed from the central points of switching the signals to the reduction in costs to cool and run the systems themselves. Locations can be consolidated to save space and utilise the power that is required rather than duplicate it throughout several locations in the building